Our beautiful Arabians excelling in the Dressage arena

Arabian Horses have been well known as the ultimate allrounder for centuries, and yet we still regularly hear from the uninitiated ‘oh - don’t buy an Arabian’ or ‘Arabians aren’t good saddle mounts’.

At Future Farms we have continually strived to prove the knockers wrong, and regularly take Arabian and Arabian Derivative horses out as open Dressage horses.

With Dressage, anyone can register and compete at EA competitions with any breed of horse, however you do need to gain qualifications to compete at the higher competitions. Last season we competed two Arabian Derivatives – both by the super purebred sire Crave FF (Mash x Bremervale Charmed), in the pony sections.

A mare, Gleniph Tiramisu owned by Sabble Farms was shown in the sixyear- old section, ridden by Megan Cheeseman, and the gelding Kizashi, owned by Ron Campbell in the fiveyear- old section ridden by Jessica Dertell. Both horses had multiple qualifying scores from various national and international judges, and won multiple events throughout the season. Hence, both very quickly qualified to compete at the sport’s biggest event of the year, the Australian Dressage Championships, where each would try to win the title of Australian Dressage Pony of the Year in their age sections. It is interesting to note the age sections in Dressage that are so specific. This is due to both the vast number of horses competing at any given event, as well as the level of training, undertaken over many years, that a competitive Dressage horse may experience.

At the 2019 Dressage with the Stars Australian Dressage Championships, both Kizashi and Gleniph Tiramisu had good first rounds. These results qualified them to ride again in the final rounds, competing for the Gold, Silver and Bronze Dressage Ponies of the Year.

As the horses complete their tests, a brief bio is read out explaining the horse’s breeding and accomplishments – it is always fun to see the hundreds of people in the stands have a word or two about ‘Arabian show horses’ competing in Dressage!

Gleniph Tiramisu was beaten by a newly imported German Pony, and thus we claim she was still the best Australia had bred and trained. To further highlight the win for Kizashi, he was then featured in an article in the Euro Dressage magazine, talking of his win and his breeding. It is this kind of promotion that our beloved breed benefits from the most.

There are many Arabian and Arabianbred horses out there competing in Dressage – let’s keep them all going and strive to prove again and again that Arabian horses can do anything!

For more information on Dressage, please contact your local Dressage Club, Pony Club or Adult Riding Club. Or contact Kate Dertell from Future Farms and learn how you can turn your Arabian into a Dressage star. 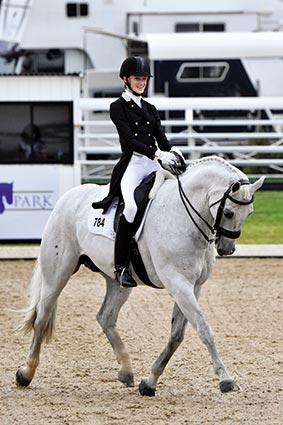