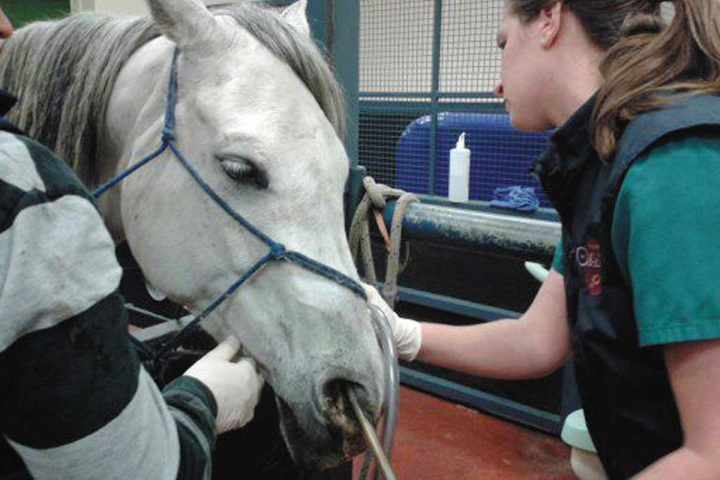 This experience and the take home message from the vets is something I wanted to share ...

A short float ride turned into a trip from hell for my eleven-year-old purebred mare, Jaydana Cherrish (Shakla Zulu x Desert Fox Samone), also known as Magic Buttons. I cannot express my horror when I opened the float to see Magic streaming thick green mucus from both nostrils and the front interior of the float sprayed with coughed-up slime.

After unloading and returning to her paddock, I stayed with Magic and waited to see if she could resolve the problem on her own, but that moment never came. She began trembling and lay down at the end of her lead rope, prompting me to make an emergency call to my vet. Magic began to colic and her breathing became loud with bubbling gurgles. Night had fallen and it began raining heavily.

Choke – or oesophageal obstruction – is caused by an impaction of food which obstructs the oesophagus between the back of the mouth and the stomach. Magic choked because she could not lower her head in the float to clear the impacted hay that balled up as she chewed. That in turn made it difficult for her to produce enough saliva to swallow the compacted hay. Due to a horse’s soft-palate structure, such blockages cause the nasal fluids to well up forcing them to come from the nostrils.

Local vet, John Hamilton came within minutes and I led my distressed mare to him for what I thought would be a simple procedure. “A lot of times choke has already stopped by the time you get there,” John said. Her gut sounds had slowed right down. He gave her anti-inflammatory and stomach relaxant drugs and then passed a long stomach tube through her nostrils and down her oesophagus to try to break up the blockage with warm water, which usually works. “She’s a good natured horse which made it a lot easier,” he said.

After an hour of this lavaging process, John decided to sedate Magic. Blood from broken vessels along her nasal cavity, caused by the tubing, combined with mucus had dripped from her nose down my arm. John worked for more than two hours that night to try to resolve the blockage, but the obstruction wouldn’t budge. The rain continued to pelt down on the tin roof and I was freezing cold beneath my putrid oilskin coat.

“We couldn’t dislodge it. It had formed at the entrance to where the oesophagus enters the chest. We started to worry about the damage to the oesophagus and aspiration pneumonia from inhalation of foreign material entering the lungs, which can lead to animals dying,” John said. After hours of trying unsuccessfully to budge the stubborn mass, John referred us to Werribee Equine Hospital for an endoscope. He warned me that Magic might require surgery and that there could also be further complications. I burst into tears and rang my friend, who was at home asleep, to ask her to accompany me on the two hour drive to Werribee.

Dr Cristina Rosales said choke is not common at the hospital. “Horses going into surgery have a worse prognosis than horses that are able to be managed medically. We assume that every choke that comes in has some degree of aspiration pneumonia, until proven otherwise.”

Magic’s breathing and bloody mucus were worse by the time Cristina saw her. “She had increased lung sounds. We took a blood sample, and fortunately she was still well hydrated,” said Cristina. She was given more sedation and a smooth muscle relaxant before an endoscopy, which was passed down her trachea and then her oesophagus. It revealed that a ball of coarse roughage was blocking her thoracic inlet. Long-term damage was still hard to assess.

Cristina and her nurse lavaged Magic for nearly an hour, scoping her intermittently. My friend and I watched silently. “It was a fair way down. We made sure her head was low so she couldn’t keep aspirating. We used warm water to try to remove the blockage. It moved a little way each time, making progress,” said Cristina. The entire length of the two-metre tube was passed down Magic’s oesophagus. While most of the blockage was lavaged out, some of it was pushed into her stomach to clear the passage.

But we weren’t in the clear yet. Cristina explained the serious nature of aspiration pneumonia. “She had moderate to severe consolidation of her lungs, or fluid filled areas, especially towards the front when we scanned her. She went straight on a broad-spectrum antibiotic and non-steroidal, anti-inflammatory drugs which made her feel better.” Magic spent two nights in intensive care. Two days later, she was allowed small handfuls of damp lucerne chaff. “The oesophagus loses its mobility, so we don’t feed them until we’re happy they can swallow properly,” said Cristina. 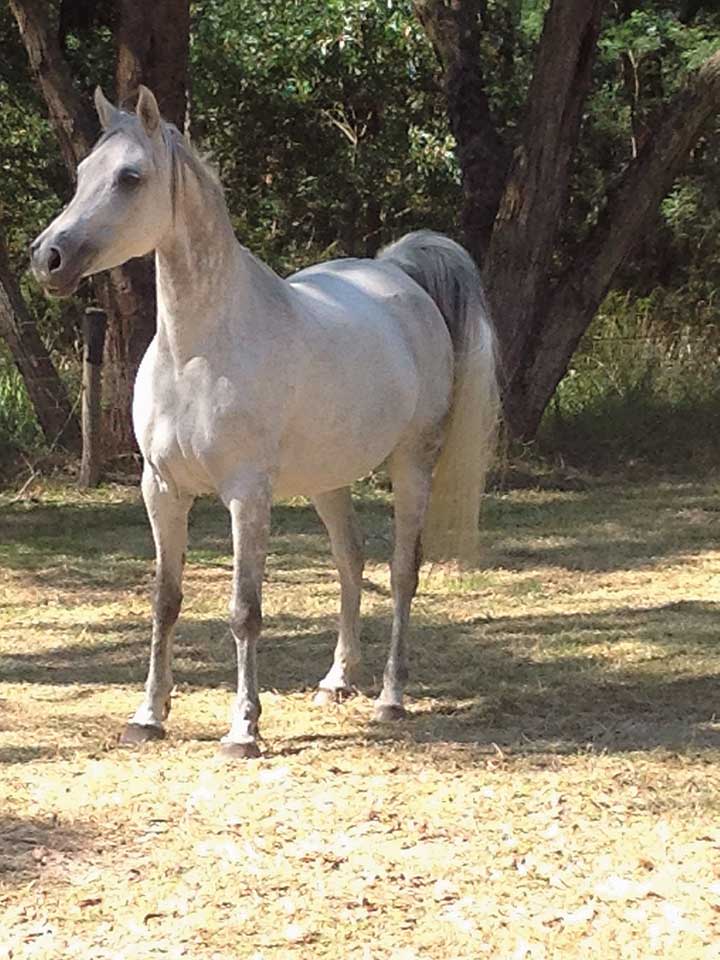 Magic Buttons feels great after her trauma and depression

Magic was depressed and uninterested in my visits. The following day though, Cristina said she was beginning to get talkative again and Magic demonstrated by giving me a little nicker when I entered her box. After re-scanning her improving chest, I was advised I could take her home. I was warned that she would be very hungry and that I had to limit her access to pasture to stop her gorging herself and re-choking.

Once home, I rugged her and monitored her temperature twice daily. I drowned her antibiotics in her favourite molasses, but she showed no interest in lapping it up. She turned down her tasty treats and I had to syringe her powders down her mouth. I turned her out for small sessions to watch her graze, but she would only take a half-hearted pick at the grass available to her. She was clearly not herself. That all changed the day she greeted me with a screaming neigh and galloped around the paddock straight back to me, hassling me for food and pats. I knew then I had my horse back.

A week later, I took her back to Werribee for a scan and a blood test. She got off the float and neighed loudly to her former hospital neighbour – a horse with one eye. After a two month spell Magic has fully recovered. However, she is not allowed to eat hay again, and all her feed must be dampened.

Cristina warns about the dangers of feeding horses in floats. “It’s a risk travelling horses with hay. If it’s a hot day, or they’re extremely hungry or dehydrated, it can increase their risk of choke. It’s like eating dry Weetbix.” She recommends unloading horses regularly on long trips so they can lower their heads to clear their airways and have a pick and a drink.

This experience and the take home message from the vets is something I wanted to share. My tale could easily have had a very sad outcome. Luckily for me though, it ended well and I still have my Magic Buttons. 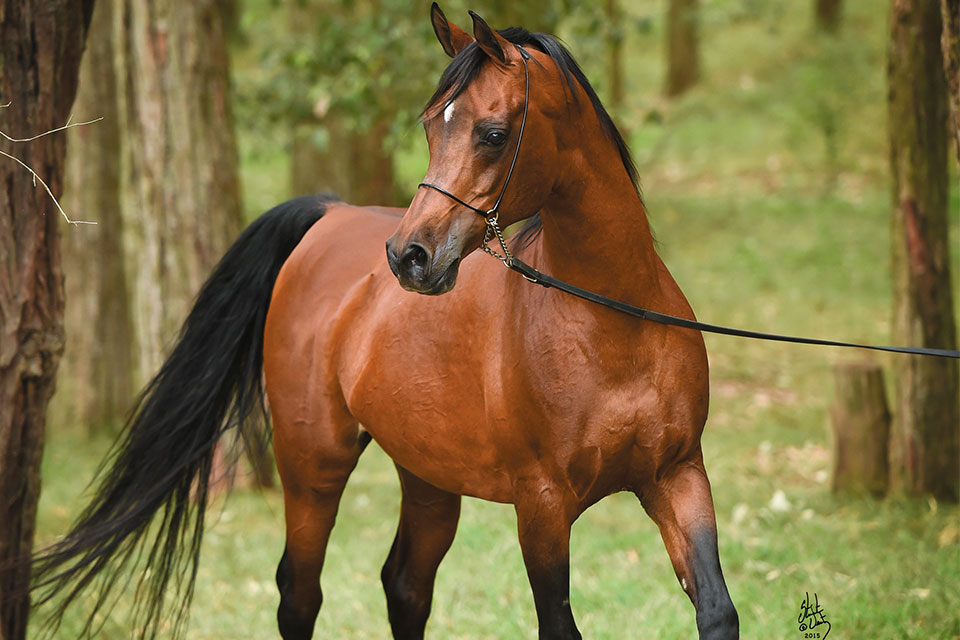