Together, We Are WAHO 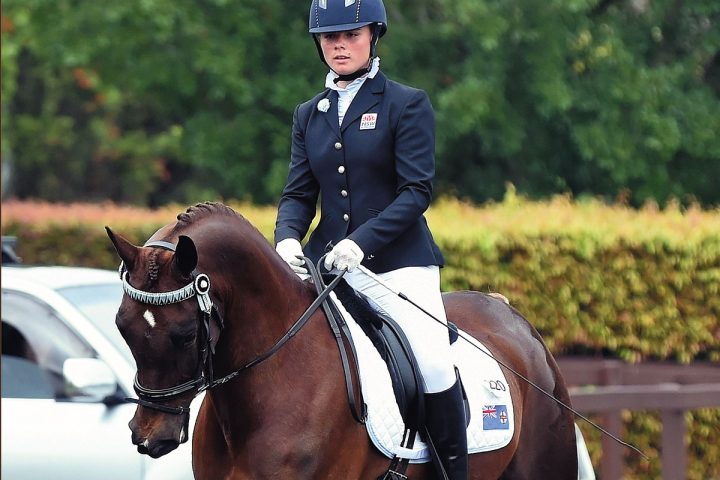 The saying “Hard work beats talent when talent doesn’t work hard” is a great mantra for everyone and something that Charlotte Phillips tries to live by.

Charlotte loves a challenge, and if given an easy path or a harder way to get there – she will take the hard way! According to Charlotte, it’s what breeds character. So far, I think her parents agree with her. Charlotte was thrilled to be awarded the Arabian Horse Society of Australia’s inaugural Junior Development Grant in 2015, and encourages all other youth riders on Arabians or Arabian Derivatives to just get out there and give everything a go.

Unlike many other successful younger riders, Charlotte does not come from family who have a background in any sort of equine activity – she simply picked up the love of horses when she was nine, and managed to convince her non-horsey family to purchase her one. This is where her love of horses started and it doesn’t look like it is going to end anytime soon. Charlotte and her family would never consider themselves at all wealthy and therefore have always had a very strict budget for Charlotte and any horse purchases. They have always hoped the talent and desire that Charlotte has to compete on her horses will overrun the fact there will never be a horse in the stables that costs more than the family car! Of course, this may limit Charlotte’s competitive edge one day, but for now, Charlotte is enjoying her hobby, thoroughly enjoys riding and training her horses and thrives on competition. A pretty good blend really!

After purchasing her first little pony and entering local pony club competitions Charlotte soon outgrew him and moved on to a purebred Arabian mare. Charaway Tarnikka (Aivu x Ejay Ngaio) was purchased sight-unseen from Queensland and this is where her love of Arabians started. Charlotte and Tarnikka competed in pony club, local agricultural shows and smaller level Arabian showing for two years, until Charlotte outgrew her little galloway.

After quite a bit of a search, she ended up purchasing the lovely purebred Arabian gelding, Rose Gum Goldrush (River Oak Imprint x River Oak Illusive Girl). He had been for sale in Horse Deals for many months with absolutely no interest. Charlotte seems to think the universe was just waiting for her to meet him. To cut a long story short, the rapport between the two of them was instant and they went out and won quite a few coveted East Coast Arabian Championship titles together, including the Champion of Champions Amateur Ridden. Quite a feat, as they had only been together four months and Charlotte was 12 years old. To say the family was impressed with this lovely gelding was an understatement.

Charlotte’s parents could see this love affair with horses was not going to end anytime soon. They decided to purchase their own little piece of paradise and found a little hobby farm on the South Coast of NSW, near Berry, to house the collection of horses that Charlotte and her sister, Madeleine, were amassing. After having horses on agistment for many years, it was fabulous to be able to look out of the window and see them munching away in their paddock. It may have been a property that hadn’t seen a paintbrush or a mower for a decade, but it was theirs!

As Rose Gum Goldrush (aka Snickers) was introduced to life with a young child rider, he was exposed to pony club, trail riding, local riding club competitions, agricultural shows, and low-level dressage. After a few years of doing high-level showing, Charlotte realised Snickers needed a new challenge, and thus they started their dressage career in March 2015 on a competitive level. In 18 months they have accomplished so much in dressage including champion – winning titles at the NSW Young Rider Champs, NSW State Interschools and the Australian National Interschools as well as winning Horse and Rider of the Year for her local dressage club, Young Rider of the Year and Novice Dressage Horse of the Year. Not a bad start to their dressage career.

Now Snickers has begun learning his Medium dressage movements, competing Elementary and still loves dancing in the sand with his best friend, Charlotte. As well as keeping busy with Snickers, Charlotte has a new challenge ahead: Teaching her young Arabian Warmblood, Aloha Gladiator (aka Russell) the lower levels of dressage and to bring this talented young horse through the ranks, something she is extremely proud of thus far. Aloha Gladiator (Aloha Majestic King x Aloha Embrace) has competed in Official Dressage over the last few months, and is consistently bringing home 70%+ scores in Preliminary dressage along with a couple of good Novice scores as well. The future looks extremely bright for young Russell as well. He has had quite a few challenges in the past but is growing into such an amazing young dressage competitor. Charlotte said she just couldn’t be more proud of him.

Charlotte leads an extremely busy lifestyle, as the rest of the family do, but thrives on it. Her mother, Rachel works full-time as an Executive Assistant to a CEO and her father, Ben, is a Captain of a ship in the Merchant Navy. Add this on to Charlotte being in Year Ten with the associated homework, working part time at McDonalds and volunteering at the local riding school during school holidays and some weekends, it’s a busy lifestyle. To fit in the work her horses need during the week, sometimes she will have to ride at 5.30am in the morning or 7.30pm at night with all the lights on in the house to ensure she can actually see where she is going! It’s consistently hard work but as her parents said at the beginning, hard work will override talent if talent doesn’t work hard.

As a family, the Phillips are extremely supportive towards their daughter and her riding, however, any wins that Charlotte has obtained would be impossible if she was not extremely motivated and if she didn’t have a desire to learn, as well as a desire to win.

Charlotte feels many youth and adult riders out there need to believe in themselves and their horses a little more and is always telling others to just go out and do what they want to do and don’t worry about what others think or say. Rachel remembers Charlotte saying when she was 12 that she would “rather be a small fish in a big pond, than a big fish in a small pond”. Give her a class of 50 horses where she may or may not obtain a ribbon or a class with two horses where she’s guaranteed a win and she’ll choose the larger class.

Charlotte works extremely hard to be the rider and horsewoman she is becoming. Snickers and Russell are treated as normal everyday child’s mounts. The horses are not stabled and Charlotte doesn’t even have an arena to ride in at home – just big-grassy paddocks. She feels it’s not what you have; it’s how you work with what you have! Riding along the beach is as good as riding in an arena and Charlotte’s horses are certainly happier for it. She mixes the training schedule up for the horses and may spend twice a week doing lessons at a friend’s indoor arena, a day at pony club, a day trail riding and a day riding around in the back paddock. Both Snickers and Russell enjoy the change of pace and the results show.

Charlotte knows just how important lessons are for her and the horses. She is fortunate to have had the same instructor since she was ten, Tibby Barbour, who is a dressage coach. Tibby has seen Charlotte grow up and become the girl she now is, and has enough faith in her that Charlotte occasionally competes on one of Tibby’s horses at Medium dressage level. Doing this means Charlotte learns the more advanced movements, and can then try to teach her horses. Charlotte is also fortunate enough to have regular lessons with Roger Fitzhardinge and has an extremely supportive local Dressage Club (Shoalhaven Dressage), which has many A-level dressage instructors on-hand for a bit of advice if required.

The next 12 months for Charlotte and her horses are going to be busy and Charlotte has a plan. Snickers will certainly start his Official Elementary competitions in January, Russell will continue in Preliminary until mid-year and then move on to Novice. Charlotte doesn’t see why both horses will not be extremely competitive at every dressage competition she enters, whether this is at East Coast Arabian Championships, the Australian National Arabian Champs, the NSW State Interschool Championships or the NSW Young Rider Dressage Championships. She’s got her yearly planner mapped out on her bedroom wall – and she’s sticking to it! 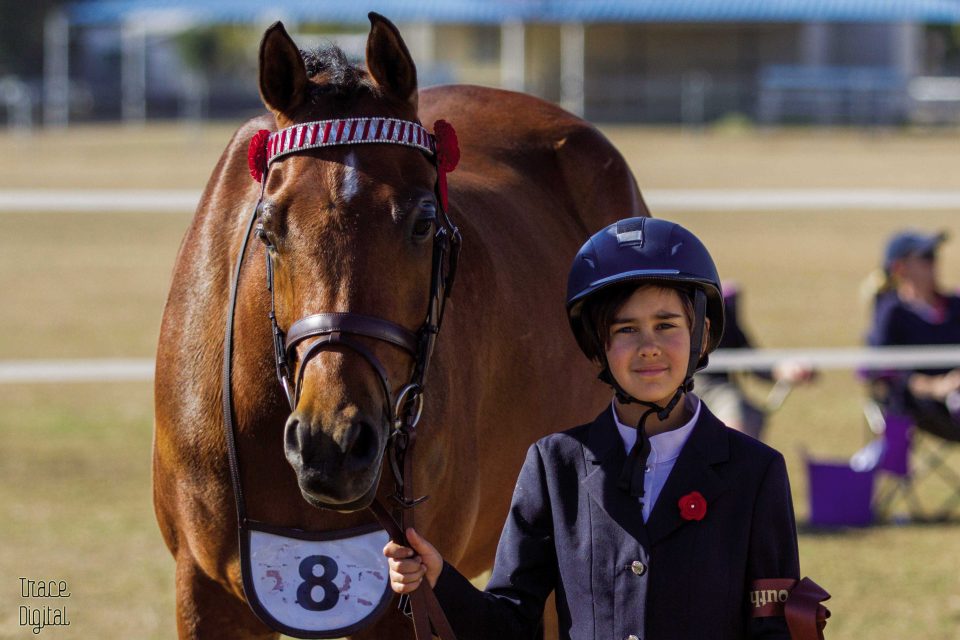