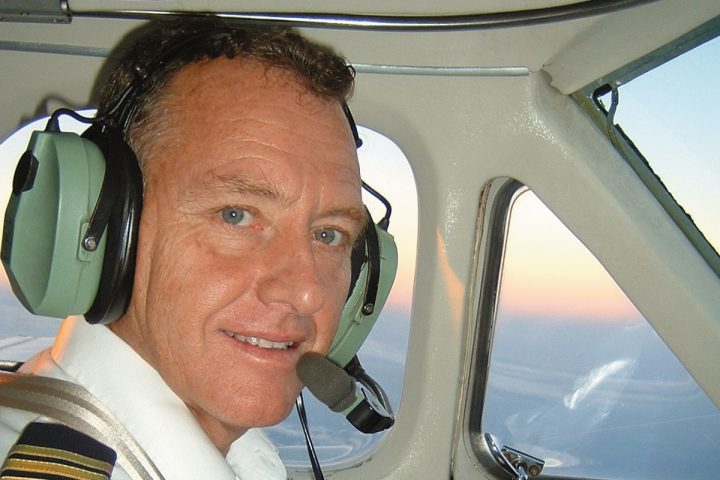 Gary Cunningham in his aviation role

Another person who is away from the home fires a great deal is Gary Cunningham. Married to Catherine (Cate), the Cunninghams founded the boutique stud, Khalid Arabians situated at Stockleigh in Queensland around five years ago. Gary is a pilot working with Pearl Aviation, a company responsible for air calibration. This means they test all the approaches to airports around the world to ensure that aircraft track correctly to runways using the navigational aids.

Tell Us More About Your Aviation History.

The passion of my life is flying and the best role in flying I have ever undertaken is as a pilot for the Royal Flying Doctor Service (RFDS). This was where I met Cate. We worked together when Cate was a flight nurse in Meekatharra, Western Australia. We flew some pretty amazing missions together and saw so much. To do things like resuscitate trauma victims on a truck back in the middle of nowhere with emus and other wildlife watching was surreal. You certainly learn how to improvise. I am terrified of needles and not fond of the sight of blood but that fear was soon sorted. These roles were a privilege and to be able to support the people of the bush and tourists and take them to safety was so gratifying.

We spent many years spanning thousands of kilometres based in Meekatharra, Derby (WA), Mt Isa (QLD) and Sydney (NSW) where I worked for Air Ambulance and later RFDS, whilst Cate worked at NSW Emergency Transport Service for children and babies, many will know this as Child Flight. Even though many of those missions were by ambulance and helicopter, we often flew together on the longer haul missions, always interesting when we had to work together.

How did Arabians come into your life?

Cate bought me a Half Arabian palomino filly named Kharinyah’s Glimma N Gold (Animation KEI x Leechdale Golden Fantasy) as a birthday present five years ago. The fact she was a registered Half Arabian was incidental, I love palominos so that was the main criterion. We had only seen a few pictures of her before she arrived in Queensland. How lucky we were.

You own an Arabian horse stud?

Yes, we have a small boutique stud named Khalid Arabians with 11 Arabian and Derivative Arabians. Bloodlines in the breeding program include Padron, El Shaklan, Bey Shah, Ali Jamaal, Marwan Al Shaqab and as a result our horses are certainly producing type, attitude and movement. The most important thing for us with the horses we breed is correctness and beauty but at the end of the day they need to be functional horses that can go on to saddle careers. We are heavily involved in halter showing our youngsters and have been blessed with our show team going from strength to strength. Our horses are conditioned at home and we engage the services of professionals to showcase our beautiful horses at shows. We also actively seek advice about how to continually improve what we do. It is not all about winning but showcasing each horse to its full potential – if they can do that, the rest is a bonus.

We are extremely proud of our horses and thankful to the professionals who help us live our dream.

What challenges do you face with the stud?

There are many challenges as a small stud owner but our challenges are only minor compared to large studs. Our biggest challenge is stallion management. It poses so many risks and given that my wife and I both carry long-term injuries, we find it hard to coordinate this easily.

Another challenge, which is just simply heartbreaking, is when we lose stock. Last year we lost two super colts and a stallion. The two losses were after the East Coast and Australian Championships, the shows we had amazing results in. We were brought back to earth with a gut-wrenching thud. Our stud stallion died some time later, which was just devastating. We have his one and only foal on the ground now and it’s very hard not to wrap him in cotton wool.

Currently, besides halter showing, what other activities do your horses do?

We have one competitive saddle horse, Kharinyah’s Glimma N Gold, and she has had extensive dressage training along with a fabulous halter and saddle career, including multiple East Coast and Australian championships.

Recently we dabbled in Arabian racing. It’s lots of fun but difficult in the fact that racing authorities are yet to fully embrace this sport in Queensland and therefore it’s hard to commit the training and resources to horses when it is unclear whether a race will go ahead or not. The other major difficulty is lack of sponsorship and support in Queensland. Whether it is viable to continue – we will just have to wait and see.

I like to snow and water ski, however, since our addiction to the Arabian horse we have little time for anything else. We need to get the balance right one day.

My bucket list is simple: get the farm fully set up, go to Scottsdale, Vegas, Poland and Paris and see the world Arabian horse platform.

The future for Khalid Arabians will be to remain small with a few foals being born each year. Quality is far more important than quantity. This way we can maintain a small show team and strive for the stars. The exciting part is we are on track now for showcasing our own breeding program, which makes it even more personal.